Is it that time again? It’s the last day of the month, that means I have been summoned to my little corner of the internet for my (slightly) regular monthly dev log. As always, I’ll discuss what I’ve been up to, what’s new & what’s next. Let’s begin…

The goal hasn’t changed so, did we do it? Well: 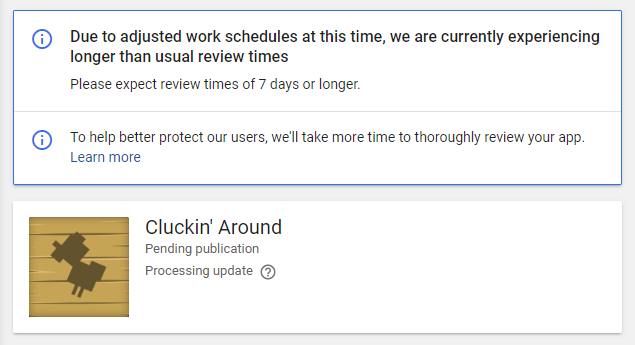 It’s pending (Apple is “pending dev release”), there’s a small chance I may have a few small things to fix (if Apple or Google have any problems) but so far it’s looking good! 😀

Technically, I said “THE GAME WILL BE OUT BY MY NEXT POST”. However there is delays on getting apps reviewed at the minute, which is understandable. So we just need to be patient. The second it’s out, I’ll be posting links across my social media accounts, so make sure you’re following!

Side note – The Egg Ed update has also been submitted, I’m hoping that will be available earlier (since it’s an update) I’ll keep you posted

Obviously I couldn’t get away with being bug free, fixing bugs has been more a continuous thing throughout the month. There’s been a few but let’s list a few I fixed:

I had already considered support for multiple screen sizes for android and thought I had this covered. It was only after I started building for IOS and funnily enough, after submitting my first build to the store, I realised something wasn’t right. Here’s what we’ve already seen, the game on a phone: 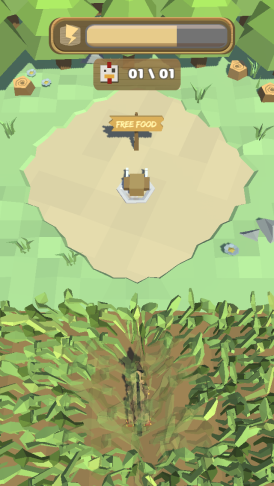 Here’s what the game looked like on an iPad: 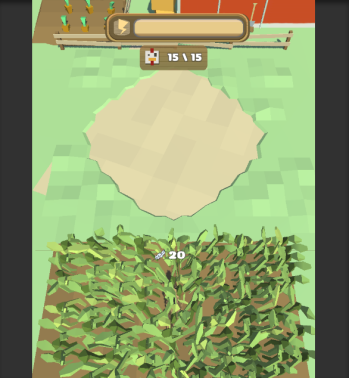 Not pretty. But it was a pretty easy, at first I tried scaling everything but that just caused more problems, here’s the solution I went with:

I had to do this for every stage and make sure all the UI was laid out properly. Then I had to cancel the submissions and re-upload, it cost me a bit of time but fixing it improves the games experience for everybody. It looks a lot better too…

This has been my first time working with ads properly, I didn’t have much experience getting them working. Even less making sure they’re set up properly and comply with the stores rules. I won’t bore you with all the details, but I spent about a week figuring it out, adding multiple ad networks and updating my privacy policy.

Shout out to my friend RadioBush for pointing me in the right direction here.

This has been the bulk of my month, making sure all the data on the store pages are filled out correctly, collecting screenshots & creating other publishing assets. Don’t forget building and uploading builds to the store, multiple times. Most re-uploads were me noticing something needed fixing rather than being rejected, for example the screen sizes which I previously discussed.

I should say, this was my first time publishing to multiple stores at the same time, it’s been fun. I learned a lot from publishing Egg Ed but I can honestly say I’ve learned just as much releasing my second game. This game is fairly larger than my last too, which has come with it’s own difficulties (especially time wise). I may end up writing a separate post, or maybe a video about publishing at some point (don’t hold me to that).

This is something I did last minute, but it was a bigger problem than I thought. Basically, endless/wave mode was way too easy… it could literally be endless. There was no challenge, I thought adding more chickens would be sufficient, really that only made it easier. More fun, but less difficult. To counter this, I made things get progressively harder, I made the turkey more dangerous in endless mode & played with some other fun stats. It’s not perfect, I’ve still managed to get past level 30 without struggle, which still seems too easy to me. It also takes a little time to get there, each level/wave is short & you can break in between but playing until you lose can take a while.

What are my goals now? I’ve finished my game, I’m done. Bye.

I’m obviously joking! Even though my game is released, it’s not yet finished, and it’s certainly not perfect. That means it’s time for updates. So what needs to be added?

Firstly I want online leaderboards so you can compete on endless mode. To do this however, I think it needs a little more balancing, that may mean making it a little harder. I couldn’t include it from the start without first making sure scoring is fair.

Customisation is coming, I didn’t have time to finish this feature but I have already made a start. Soon you will be able to buy accessories (in-game money) & personalise your little hyena however you like (woo!) More levels is also expected, currently there’s 25 timed challenges (5 stages), we can expect this number to increase as I add & fix everything else.

Finally, as we know ads are in the game. I know, I know they’re annoying, but devs have to support their games somehow. Though it’s not currently included, I will be adding a remove ads button for those that want it. Expect that in one of the early updates, I have to figure out how to correctly implement it first.

That’s everything, I assume that’s enough to keep me busy for at least this next month. Let’s see how we do!