Is it that time again? It’s the last day of the month, that means I have been summoned to my little corner of the internet for my (slightly) regular monthly dev log. As always, I’ll discuss what I’ve been up to, what’s new & what’s next. Let’s get into it…

Last month, my primary goal was to publish my game, obviously I haven’t achieved that one just yet. Give me a chance, I’m working on it. I’ll be talking more about why towards the end of the post.

Even though publishing was the overall goal, I broke that job down into plenty of smaller tasks making things more achievable. So how did I do? Well the game is technically done, unless I decide to add more to it which I am leaning towards. All of the remaining game features are finished and I began fixing the broken parts of the game. I still have to do all of the tasks on the publishing side.

The last feature we looked at was the only half working timed mode. It took me roughly 5 days to get it finished but I managed to split the game into two versions, one mostly random (endless) and the other I have full control over (timed). One of the first things I did, was create icons for the levels:

If you caught the last post, you’ve seen the level select screen was too plain, it needed something to liven it up a bit. I then set up the rules for the game mode & made sure the end screens (win/lose) displayed the correct information based on the mode, since they both behave differently.

It took a little trial and error to decide how many chickens I wanted on each level, how much time the player had and when to introduce new challenges. I even did a little player testing! When I say that, I let some friends and family play a dev build on my phone. Eventually I settled, I’m happy with how it is for now. Here’s a look at timed mode now:

(may need more balancing when I go through further testing) 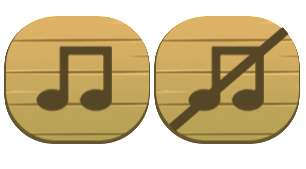 My next job was adding sound, I spent the next few days scavenging the internet for sounds & music I was able to use. Sound FX wasn’t that difficult, I have used the same site for years to collect any sounds I need. In case you’re interested this is what I use for FX:

Music is a little harder, there’s plenty of tracks available across the internet, but a lot of them I’m simply not allowed to use (due to licences). I found a few sites that provided free music, some you have to pay for, some require a credit, some are completely free. I had to download and experiment with lots of tracks to get the mood right. Finding music that worked well together was probably the hardest part.

For my first idea, I wanted there to be different music for each stage. The farm would have some upbeat banjo music, the desert would have some wild west kind of music and so on. However, after adding some music to the main menu, all the FX & some music to play on the first level, my loading times jumped. I realised its probably not efficient to have 5+ music tracks, especially if I kept adding more every stage. Back to the drawing board!

I had my next idea because of the sound I found, basically I had some sneaky cartoony kind of music & another that was a little more intense. This made me think, wouldn’t it be cool if the calm music played at first- then when you attack- the music changes? I tried it out & surprisingly it works! I love it, here it is if you didn’t catch it:

This game has its own little vibe🐔🎶

Not much left to do now, pecking away at the final things on my to-do list. I'll keep you updated! #gamedev #indiedev #indiegame #IndieDevWorldOrder pic.twitter.com/KceXEbajAF

Again, in case you were curious, here’s where I found the brilliant music/loops:

Finally!! We’re down to the final (required) feature! 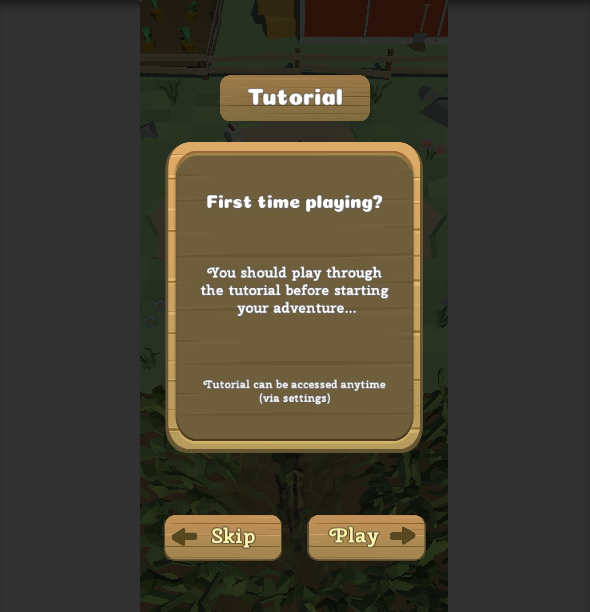 I knew I needed some kind of tutorial. The problem was- I hadn’t planned anything for it. So how was I approaching the tutorial? My original plan was to make endless mode locked, power ups locked & make things gradually unlock and appear as you play through the story (timed mode).

The problem I had there, was the challenges (huts, turkeys) were spread out between levels, it naturally gets harder as you go along. I didn’t think it was wise forcing players to play through 10-15 levels to learn everything before they can play the game properly. It would also mean having random pop-ups every few levels to explain the new stuff.

So I scrapped that idea and had to rethink my approach. My first thought was why not just learn everything in the first 3-5 levels. This was slightly better, less time until the player is free to do what they like. Including the tutorial within timed mode didn’t seem like a great solution though. It meant the player would see everything, then go back to easy levels that progressively got harder. It ruined the order.

Right, third time lucky. At this point I was a few days in & I didn’t really have any progress. No more taking the easy route, I decided to create a short tutorial separate from other parts of the game. Basically, I created a third game mode, it was a bit of a pain to get through and took way longer than I had liked. Even figuring out how it would be structured took some time, I had to decide how I wanted to introduce everything. After creating the first part, I knew this would work. Here’s a look at one of the tutorial pop ups (for huts): Overall I spent about a week playing around with the tutorial before I was happy.

Now we’re up to date again, this last week I’ve been trying to finish things up and get rid of all the bugs. I’ve been writing every problem down since the start of development. The more game breaking ones have been fixed as I go along but many have been forgotten about, until now. Currently as I finish writing up this post I have exterminated all the pests hidden in my code (that I was aware of). That doesn’t mean I’m in the clear just yet, I’ve been playing through the game looking for anything out of place. Once I think I’m done, I’ll get someone else to look for anything I may have missed. A fresh pair of eyes is always good for testing…

To break up working on Cluckin’ around I decided to prepare a quick update for Egg Ed. I did this for a few reasons, one of them being a player recommended skin. A few months ago I was left a review and an eggplant skin was requested:

I said I’d do it, many moons have passed since then… I’ve been busy working on the other game, sorry. But it is finally here: 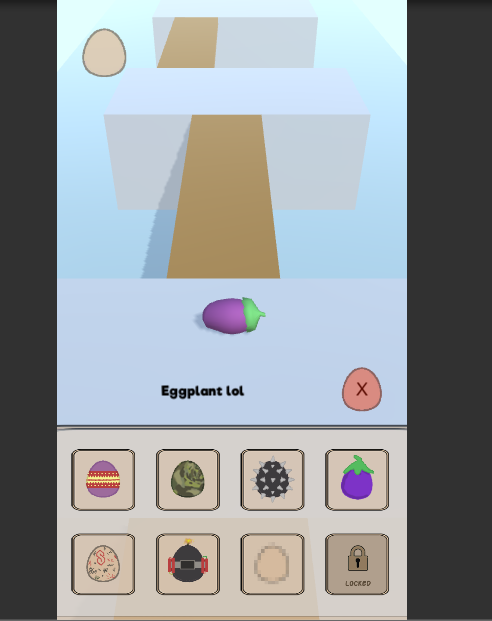 Doesn’t it look great! There’s a few more small things I had to update & a couple of extra surprises. You’ll have to wait for the update to find out more 😉

Side note – Hoping to publish this just before I release Cluckin’ Around, it’s a good way to remind myself how to get through the store pages

It’s difficult to say where I’ll be next month, hopefully I’ll be in a position to release my game and hopefully this is the last month I’ll say that! However this month I’ve chosen to slow down a little work-wise, rather than getting stuck or falling behind.

I’ve done that purposely because honestly, it keeps me busy. I could probably crack the rest of the game out in a week or even release it now after fixing any bugs. But at the minute, I like keeping work on my mind, it’s a good distraction. So here’s what I’m thinking, I spend the next week or two improving Cluckin’ Around. It’s technically finished now (minus testing & publishing), no harm in cleaning things up a little. Once I’m finished I will be looking to release. BY THE NEXT POST THE GAME WILL BE OUT!