It’s the last Saturday of the month again, that means it’s time for my (slightly) regular monthly dev log. As always, I’ll discuss what I’ve been up to, what’s new & what’s next. Let’s get into it…

Before I get into what I’ve been up to, last month we finished up on Egg Ed and it seems right to briefly reflect on that and share some stats. So how did it go? I made my first official game, did it in good time and it wasn’t too stressful (much). I’d consider that a success! The game was nothing spectacular but it was a perfect place to start. Anyway the stats: 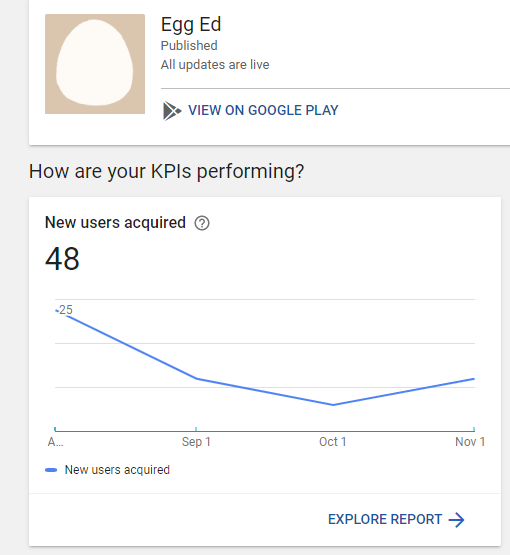 So far the game is performing best on Android, but that could just be because it had a month head start. I’ll round up and say its got around 100 total installs, gaining around 1 daily. Which isn’t bad considering I didn’t even expect it to do that well. A lot of these are my family & friends, along with the lovely people I speak to on twitter. If your one of those people, thanks for supporting! I promise the next game will be much more… creative. And now we have set the bar, we can set a goal, let’s aim for 200 installs this time!

I wanted to continue my journey with the 10 prototypes, however another idea cropped up that I couldn’t resist, chickens. I’ll be honest, I had no idea what I was doing with this project. But I’m having too much fun with it…

I started where we always start, in the sketchbook, drawing as many weird chicken lookalikes as I could. Hoping to get an idea of how the game works. But After a few days, I was pretty stumped on how to do that. I had lots of ideas for mechanics and upgrades but the game itself was missing things. At this point the idea was as simple as this:

A laughing hyena running through a bunch of chickens, each bite exploding into nuggets and wings..

Sure it’s funny, but it’s not a game yet.  I didn’t want to delay any longer so I decided to try prototyping that idea^ and taking it from there.

I managed to get the basics of the idea finished pretty quickly. And it was fun running around eating chicken dinners. But there was no way to lose, no way to win, insert the energy bar (hunger):

Basically the bar drains slowly, even more when the player is moving. When it reaches 0 its game over, that gives us a way to lose, but what happens when all the chickens are gone? I had lots of crazy ideas for this, for example I thought about scaring the chickens into laying eggs and making more chickens, going for some kind of endless theme.

But, I always have a habit of over designing so instead of going for something huge and impossible I thought, how do I make it simple? This time we have levels. the game is still endless in a way, but the goal is to complete as many levels (and eat as many chickens) as you can before you flop! Yes this means the bar will save its value between levels.

I liked this idea because it means I can make the game progressive, but random. Introduce mechanics over time and basically add as much as I want to it, even when it’s finished. I haven’t fully introduced this yet but I am currently working on it.

There was one more problem, look at them chickens in the last gif, they are so inanimate. So my job before making levels was to bring them to life. I basically coded a chicken brain! Should I be proud?

I made them make decisions (return home, peck, fly etc.) that part was easy. Then I wanted them to get scared, react to the player, because no chicken wants to be dinner! It also just makes the game that little bit more satisfying, Let’s have a look at what I’ve got:

I also got a few other things working like player hiding, chicken calming, better UI feedback and so on. This took a lot of trial and error but I’m happy with what I have so far. Let’s talk about the plan of action.

Game in a week

I managed to create Egg Ed over a weekend, and continued to work on and update it after release. Since progress started slow, I thought I could try the same thing and go for completing this game in a week. I’ll just admit it now, I was wrong. A few days in I realised this one might need a little longer. And just looking at it now, there’s still a lot missing. Here’s a few things I plan on adding or need finishing:

The plan was to cram everything into a week, the plan now is to have a solid prototype by the end of the week (Monday). I think this is easily achievable I’m almost there already! Once I have all the basics of the game I can work on improving the visuals, adding the audio, fixing bugs (I’ve noticed a few already) and just generally making the game better. Yeah, yeah less talking so how long?!?! I’m hoping to have a releasable game by the end of next month, but a more realistic deadline is by the end of the year.

Once again Apple has given me a little push:

They stop accepting submissions for a brief period over Christmas. So I’m treating this as my deadline. Ideally before, but if not it only gives me a few days before the new year, So I best get cracking… (that’s not an egg joke)