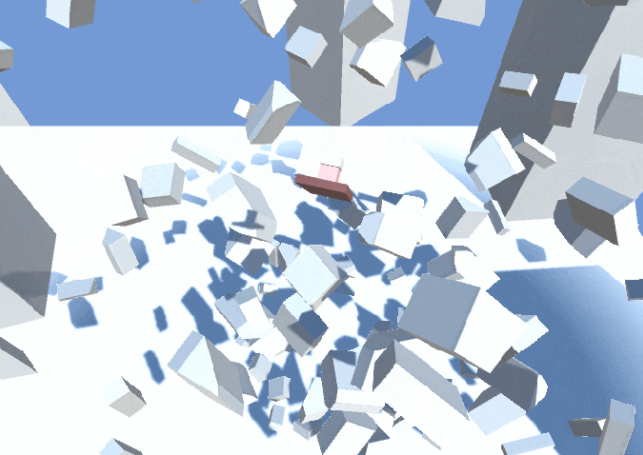 This one was quite difficult, not only could I not think of a cool enough idea straight away, the idea I ended up going with was quite big so I didn’t get too far with it. The idea was you were in a utopian city (or at-least a block out) and you were the one enemy. Originally I planned you were in a vehicle (e.g. tank) and just drove around destroying stuff for points. Not the simplest of ideas especially for an hour, but let’s talk about how it went anyway…

The vehicle somehow magically got exchanged for a magic carpet, while coding a car controller I was experimenting with physics and somehow created this. So, rather than spending the rest of my time fixing it I thought why not just make it a magic carpet simulator that would be quite fun anyway. I didn’t make the controller perfect for the sim to be more realistic I’d have needed a lot more time to balance the controls but you can fly around so it’s halfway there.

The next job was building destruction, given more time I’d have liked to use actual buildings but for now they are just big white blocks. I created the destruction in Blender using cell fracturing, a 5-minute job but it’s quite effective.

I managed to get some kind of city in there, sure it doesn’t exactly represent a utopian city but it works for this. Throughout this challenge it was suggested we add an extra element of randomness, rather than just use a random theme we are considering adding a random time limit. This means rather than 1 hour we can have 2 hour challenges or 4 hour challenges. This is just an idea at the minute, I’m not sure when or if we will give it a try, but it would be quite interesting & we’d be able to create much better content.

In terms of the game I managed to learn a few things, I worked on some kind of flight controller, even if it was very simple it’s my first time trying anything like this so I enjoyed playing with it. I also think I’ve got destructible objects down quite well, I managed to get them working in Finger Ninja (my latest project) and replicated it quite easily.

The biggest and probably only con to this prototype came with the time limit, if I had more time I could have added the features I missed (scoring, city variety, death etc.). It’s my own fault really for creating a fairly large scale idea but I do think the theme this week was quite challenging and that didn’t help.

The project did go fairly well though and I have definitely produced a lot worse throughout some of these 1hr challenges. Saying that I’m somewhat happy with this, I can’t imagine I will return to it anytime soon but I’ll keep a hold of it, another one down.